The Refuge consists of two parts, one in the sky and the other one on the ground, connected by elevators. In a normal run, Niko's objective in the first part is to help the Lamplighter fix the elevator to the ground, and in the second part to enter The Tower after finding out more information about it in The Library. The Refuge's phosphor color is red. 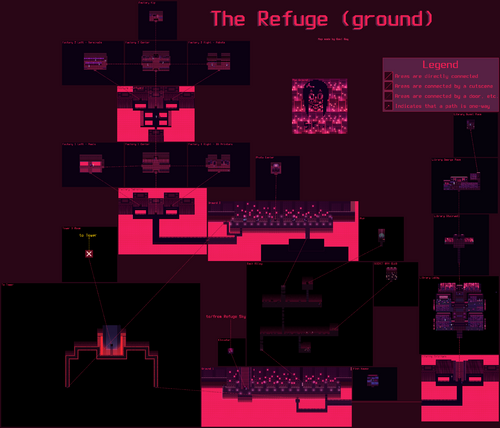 The catwalks are the first part Niko must go through and the higher part of the Refuge. Upon arrival, Niko will be greeted by a robot who informs them that they cannot pass further unless they are holding a seed, in which case the robot grants them access to the garden.

A giant robot is stationed before the T-intersection connecting the Glen entrance to the Elevator deck and the Garden. The robot will not allow Niko to pass into the Garden unless they carry the kernel from which Maize can be reborn.

When Niko arrives here, they will meet the Lamplighter who will tell them that the elevator isn't working because the button that displays "GROUND" is missing.

This location has many separate rooms as well as a hallway. The first room contains a robot that will scan Niko, and upon finding no suspicious activity, set their threat level to low but will warn Niko that they are monitoring them.

In the second room resides a sad young lady. Upon interacting with her, no dialogue will appear, instead showing a long line of ellipses.

The third room contains another robot and a young girl. Upon interacting with the robot, they will ask Niko if they want to play a game. After being asked about many settings, Niko decides not to play. The girl will iterate that her parents are never home and that she doesn't mind, as she has the robot to keep her company. They mention taming, but are unable to explain it to Niko.

The fourth room contains a ram named Betsy and a citizen of the Glen that has recently moved to the city. They explain that things are very different then from the Glen and how they miss it. This room also has many chewed up or completely eaten potted plants, presumably eaten by the ram.

The fifth room contains a roomba, and upon interacting with it, the player can tell Niko to ride it, which can be done infinitely. If Niko exits the room while on the roomba, they will stop riding it. Riding and dismounting the roomba awards the Steam achievement We Ride At Dawn.

Mason can be found in the sixth room, as well as many different types of plants. Talking to Mason after placing the kernel of corn in the garden pot will give the item dirt. This room also has sinks that can be used to refill the empty tube.

South from the left-most apartments, a large room with bookshelves, a small coffee machine, fridges and an NPC with a TV as a head can be found. One of the fridges will have the magnets on it.

The cafe consists of tables and chairs, a coffee machine and Ling. Going here when Niko is hungry and talking to Ling will play a cutscene where Niko confesses their worries about the sun and their home world. Viewing this scene unlocks the "Pancakes" achievement. The metal can is also obtainable here.

In the office, a stapler and an tape dispenser are adhered to a desk. A nearby note explains they can be used, but they are glued in place to prevent theft. The tape, if interacted with, can be used on the magnetized (?) button or you tried to prevent it from collapsing. The main Refuge generator is located in this room, and is guarded by a robot.

Although called the Garden, there are no visible plants in this area. Small pools of phosphor in the ground form the lightbulb emblem. In the center is an empty pot where Niko can place and tend to the corn kernel left behind by Maize.

Here, Niko can observe a large portion of Refuge, as well as pink water reflecting it while pensive music plays. By continuing to walk along here, Niko initiates a conversation with the player about where they live, and will ask where the player lives. This room loops back to a staircase that returns to the countdown room.

In the Solstice Route, Rue and Niko have a long discussion in this room about taming and the Entity before another outbreak of squares forces them go back inside.

The Surface is the second area Niko must go through in Refuge, located at ground level. They arrive here after fixing the elevator. Their objective is to reach the Tower after informing themselves about it in the Library.

Despite the Refuge being built over a visible body of water, the Newsbot and another NPC mention a water shortage caused by square particles corrupting a pipeline. This would imply that the phosphorescent water all around is undrinkable, unless the pipeline was connected to a local filtration system.

Between every building down this street are vendors, one of which sells the medicated water and offers Niko a free sample. The Lamplighter can be seen refilling dim lamp posts at the right end of the street. In one of the buildings is a camera where Niko can take their picture to put over Kip's library card once they arrange the lenses in the correct order. After talking to the NPC outside the camera room, each of the vendors will also provide hints for the correct lens order.

The Library is mainly occupied by humans and more objectheads. There are several books Niko can read in the Library written by the Author. They are about phosphor and flora and fauna from all three zones. One such book mentions that black clovers may be this world's oldest known life form. An NPC comments that this Library is a place to remember the world by, considering the possibility that it may end soon.

A robot receptionist is stationed at a desk before the archival rooms where George is working and will not allow Niko access until shown a library card with their picture on it. In George's room upstairs, Niko can find out from her how to access the Tower after she translates the strange journal. While she does that, she lets Niko borrow her bed in the adjoining room.

The robot factory is staffed by human and objecthead scientists, several of which are frazzled or fatigued by the square particles and several indicators of an impending end-of-the-world scenario.

Past a strange security puzzle, Niko can find Kip and retrieve her library card and some glitter glue. If Niko goes back and shows her the amber pendant from Silver, Kip provides Silver's backstory in a remorseful tone.

Oneshot is a game that has lots of hints of what to do in its world building so this is not the intended way to get through it's just for people who are stuck.

Never talk to the library robot unless you have a library card or want to see something funny.

These don't particularly have to be done in order.