To Sleep
To Dream
Flooded Ruins
Alula
Children of the Ruins
The Glen is the second region in OneShot. Many paths in this region are either blocked by vines, or blocked by squares. It is preceded by Barrens and succeeded by Refuge.

Glen, unlike Barrens, is mostly populated with humans and several avian folk. Niko's objective is to go through the gate to enter Refuge and get to the Tower. The Glen's Phosphor color is green. 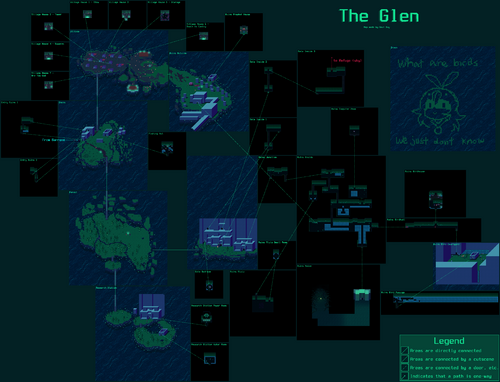 Upon arriving in the Glen, Niko finds themself in this area.

The Village is a place where most people live. It has many small houses, some of which can be entered.

The Forest consists of phosphor trees, in front of which stands a sign declaring them protected under law. There are a few stumps, presumably from phosphor trees cut down before the previous Sun had gone out. It's also possible that the phosphor trees' root systems play an important role in preventing land erosion, like in several coastal and wetland biomes.

The Ruins harbors a few robots and a computer where Entity can be spoken to. In a clearing outside is Maize, a dying plant lady, whom Niko must temporarily give The Sun to.

Alula and Calamus live next to the courtyard and regularly play here. In Solstice, graveyard will be accessible through here. There is also fish.

The research station is staffed by robots who collect water samples. To the east, a robot is monitoring an "anomaly," another cluster of glitchy squares.

A giant robot guards the gate that leads far upstairs to the rooftops of the Refuge but the robot cannot allow Niko to pass until they can write their name on the sign-in sheet. To the northwest, there is a bed where Niko can sleep.

Alula and Calamus would visit their mother's gravestone here. The graveyard is only accessible due to erosion and flooding. To the south, Cedric can be found next to a blue campfire and a flying machine.

Community content is available under CC-BY-SA unless otherwise noted.
Advertisement