The Barrens is the first major location Niko and the Player arrive in. It's a desolate land filled with multiple abysses, ruined machinery, and abandoned factories. Many Phosphor shrimp exist in this area.

The Barrens is the second main area in OneShot. As its name implies, it is a desolate area. It has a small number of NPCs and structures. In it, Niko must fix the Rowbot, so they can get to the Glen. 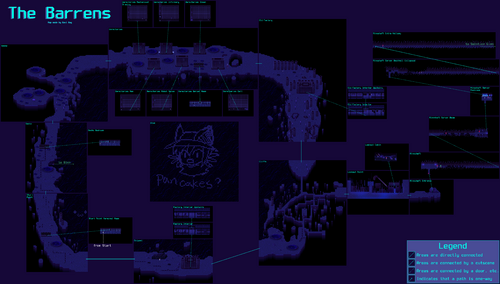 After exiting the Starting Area, Niko ends up at the left-most side of the Terminal Room in this area. When they exit for the first time, a cutscene is played showing them stepping out with the Sun as they look at the Tower from a distance.

The Barrens are for the most part abandoned, save for a few robots.

The area where Prophetbot is found in. The nearby building is the actual outpost, which contains the generator for the Barrens, a PC, and an overview map of the World. In another building, the crusher can be found, which is used to make the crowbar.

The docks of the Barrens. There is a rusty Rowbot present there that, upon using the wet sponge on it, and subsequently, given the Amber, can take Niko to the Glen.

A maze of cliffs can be found along with a few notes from past residents of the Barrens and a safe containing a gas mask and a strange journal. This is the first place where square particles are witnessed, appearing only after the safe is unlocked and walked away from.

Silver resides in a building here. One of her screwdrivers can be taken from that building.

Silver will not allow Niko to go here alone. Inside, a camera can be found. Solstice begins here. If Niko approaches the ledge for the first time, they will comment about seeing a faint yellow glow in the distance. Looking again, the yellow glow would have disappeared. Silver will then tell Niko to take a step back due to the unsafe environment. On a New Game+ run (and subsequently, required to begin Solstice), Niko will get a vision of Prototype. Along with that, the strange journal will glow.

The robot factory has fallen into disuse, but some machinery is still in operation. Niko cannot approach this area without a gas mask. The sponge and gloves can be found here.

The dormitories are still attended by robots, one of which is the Blue Guardian. Some robots will follow Niko around this area.

There are several sparkling pools full of Phosphor shrimp, one of which has formed a bubble containing a rare form of blue phosphor. There are also several smoke vents in this area, making this area also inaccessible without a gas mask. Some notes suggest the pools of shrimp play an important role in consuming the noxious gases before they can waft in significant quantities to other areas.

The mines can be accessed by observing the journal whilst standing on the clover after Niko observes a distant yellow light in the mineshaft entrance. Terminals can be found in the mines, all of which have been powered off; one of which later turns on which catches Silver's attention. There is an entrance which leads to the room where Proto can be found. Solstice starts here afterwards.